Berkley, Michigan, is a community situated in Oakland County. It was established as a village in 1923, then established as a city nine years later. Berkley has a population of over 15,000 people. It’s a suburb of Detroit, and it’s less than 30 minutes away from the metropolis. Plus, over 70 percent of adults hold a college degree.

Residents in Berkley see their community as a “Small City [with a] Big Impact!” In others words, it’s a small place with a lot to offer, especially its downtown area. Downtown Berkley has over 250 local businesses that sell things like handmade jewelry and fashionable clothes. Locals and visitors alike praise it for its walkability, so you can window shop and get exercise at the same time. You’ll find the Berkley Historical Museum at City Hall. You can view its memorabilia on Wednesdays and Sundays. The city is home to nine fantastic parks. Berkley Community Park is its largest park and features a playground, ball fields, trails, tennis courts, and more. You can go to Lincoln Shopping Center to buy groceries or grab something to eat. It has famous chains like White Castle, Salvation Army, ALDI, among other retailers. Detroit Zoo is such a treat for families. Located in Royal Oak, the zoo contains over 2,000 exotic animals, plus features like a polar bear exhibit and a mini-railroad. There are seven schools in the Berkley area: four elementary schools, one school for kindergarteners to eighth-graders, one middle school, and one high school.

Berkley real estate properties are comprised of apartments, townhouses, and single-family residences. These Berkley homes have an average of three bedrooms, though more or fewer rooms are available, too. Over 82 percent of homes were built during the early/mid 20th century, making them older and well-established. Berkley is a nice community in which to live, whether you’re raising a family or retiring. This city is tight-knit, affordable, safe, possesses top-notch schools, and provides simple access to necessary amenities.

If you’re interested in homes for sale in Berkley, Michigan, feel more than welcome to reach out to us.

Welcome home to this adorable updated Ranch located within walking distance to everything that the city of Berkley has to offer! Updates include a Brand New Kitchen with ...

Welcome to this beautiful colonial, located in the heart of Berkley. Gorgeous kitchen flows in to the dining and living room to give you the open concept floor plan you h...

Welcome to Berkley! This one of a kind home is ready for the next owners. Move right into this open floor plan bungalow that was completely updated in 2022. An addition w...

Welcome HOME to your 3 bed, 1 bath Berkley bungalow! This is the perfect trifecta - you will have a front hall closet, fireplace and a set of french glass door to your fe...

Here is an interesting opportunity to build your dream home! Building costs are now much lower. We have a few builders who will do this job for you…bring your plans or le...

Open house Sunday 9/25 from 4:30-6pm!This 4 bedroom Berkley home has all the charm and character you have been waiting for!  The home features a family room with large wi...

This delightful slice of heaven pulls you in through its arched front door into its cozy craftsman-style living space. Featuring a lovely open concept layout with glossy ...

This is not your typical Bungalow; this home offers lots of space, with 3 Bedrooms and 2 Full Baths. Upon entering the front door, you have a nice sized Living room but t...

Turn the key and move in! All of the work and expense has been done for you. Home is completely updated from top to bottom. New kitchen cabinets, granite counters with ti...

IDX provided courtesy of Realcomp II Ltd., via Real Estate Company. Copyright 2022 Realcomp II Ltd. Shareholders. IDX information is provided exclusively for consumers' personal, non-commercial use and may not be used for any purpose other than to identify prospective properties consumers may be interested in purchasing and that the data is deemed reliable but not guaranteed accurate by the MLS. 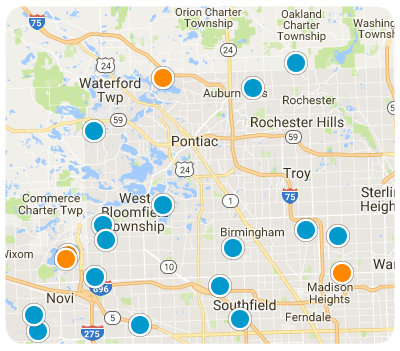